Today is Easter, and many memories are in the air I breathe. One wafts over me: I am attending an Easter Parade with my mother. It is the late fifties. I am seven or eight and wearing a light-weight lavender spring coat (who has one any more?) and a white bonnet with frothy purple flowers above the brim. My mother’s attire has escaped my memory, but I know she has on something equally dressy and very unlike what she or I will be wearing come the sixties, seventies, and decades beyond.
It is too windy and cold to be wearing these scanty items but it is a girl-woman thing, and we feel the need to dress this way for the occasion. I  hold on to my delightful hat to keep it from blowing away. When this memory itself blows away, I long not for that particular time and place but to have my mother by my side again.
And, in a sense, she does become a presence today as I stroll with Oliver down to the United Nations and Dag Hammarskjold plazas. When I first moved into the Turtle Bay section of Manhattan, in 1976, my mother often took the Broadway bus, the 104, down to meet me here for an brisk, inexpensive lunch at the small coffee shop on the lower level of the main building. Then we would check out the not-very-pricey jewelry in the the gift shop. I still have some fragile, dangling garnet earrings my mother purchased for me there. Afterwards, we’d walk out together, and if it was spring, stroll up and down the pathways between rows and rows of cherry blossom trees.
My mother was a lover of trees and these were among her favorites. Later she would do Chinese brush paintings of them under the tutelage of an artist from Shanghai, Lydia Chang. She told me the trees were like fresh laundry on a line. We relished that freshness together.
Those trees were on my mind as Oliver and I walked down 47th Street toward home. Because of a crazy man on a skate board who yelled at Ollie, “I’m going to get your ball,” we stepped into the hidden garden kept by Holy Family Church, which neighbors The Japan Society. I was a bit scared that the man yelling at us would follow us in and actually try to grab my dog’s well-worn tennis ball out of his mouth, but we were safe in this sanctuary.
Oliver likes the secretiveness of the place and the small goldfish pond there. I, too, like to watch the fish swish about, and I also like the sweet sculpture of a young Mary, looking a bit ecstatic, toward the back of the garden.
When we turned back toward the garden’s gate, I saw a tree I’d never seen (or noticed) before, budding and flowering all over with coral-pink buds and fully open blossoms. What kind of tree was it? Should I google it on my PlantSnap app? No, that would alter the mood, and anyway, the answer was immediately forthcoming.

A woman I figured to be about ten years older than I came into the small garden and stood nearby. She held an iPad awkwardly in her hands and was intent on photographing the tree. “Is it some sort of rose,” I asked her, knowing my ignorance. “No, No,” she said, “It’s a camellia.”
She needed to talk and  proceeded to explain that she had been waiting for the buds to open fully, and that this year, because of the cold, they were late. We began to talk about the City’s hidden gardens and about the splendors of the Brooklyn Botanic Garden.
I was a little surprised when she blurted out, “That stupid UN.” Then something about how that stupid place had eliminated those marvelous cherry blossom trees. 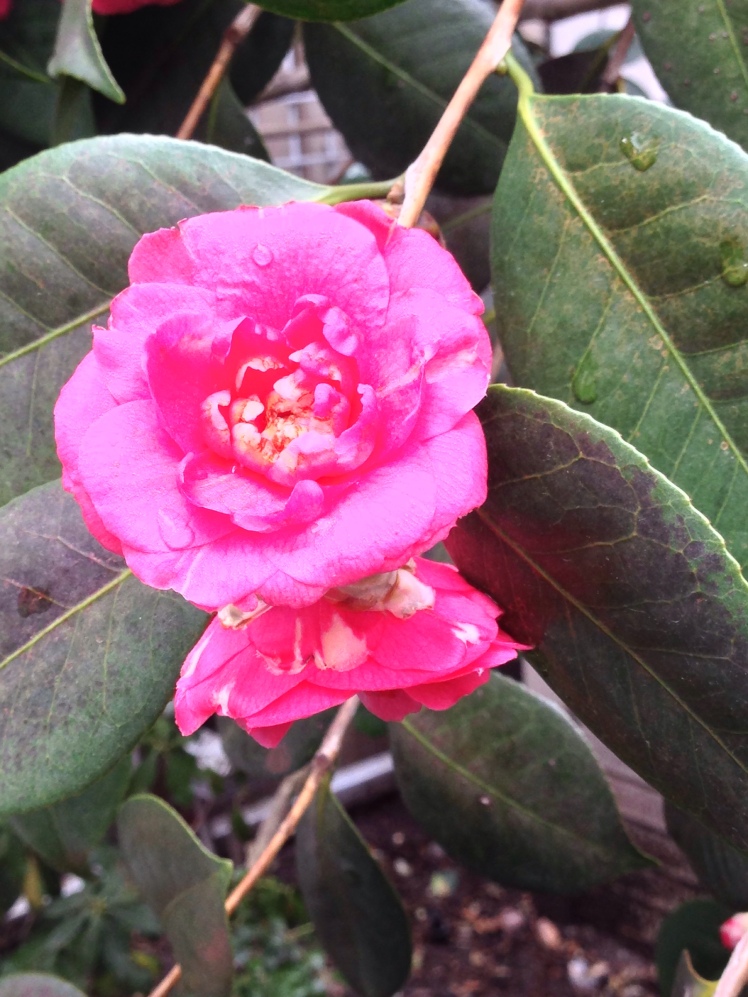 This talkative stranger with a heavy Asian accent that was at times hard to follow, did ease my mind, however, when she told me that the trees hadn’t been thrown out. Someone had taken them and replanted them in another garden.

This site uses Akismet to reduce spam. Learn how your comment data is processed.